Called to Walls at Liberty Hall!

Since the November/December rough-cut screenings of Called to Walls in Joplin, MO, Tonkawa, OK and Newton, KS, we have been in a whirlwind of editing, promoting, planning and organizing.


In early January, Nicholas set out for Salina, KS on his second editing residency in the guest-house of Brad and Jane Anderson. His stay in (what has now been dubbed) the “Garden Cottage Residency” was a much-needed refuge that offered time and uninterrupted head-space to complete the film's new and improved trailer and to begin the film's final edits.


With a newly completed trailer in hand, we contacted Liberty Hall Cinema and set a premiere date for Feb. 27th. Though this seemed like a manageable goal, we also know that Nicholas works best under pressure:)

Liberty Hall, is a historic, 500-seat theater in the heart of downtown Lawrence and has been the stage for some of our most favorite performances. We knew that this location would be the perfect venue to celebrate the film with our friends and neighbors near and far. With six weeks till showtime, we immediately began wrestling with final edits, fine-tuning the narrative, mastering the audio, building promotional materials, preparing for special guests, organizing a panel discussion
and of course, planning an after party. Whew!


For the audio mastering we had fantastic help from our good friend Chad at Pony Creek Studios in Sioux Falls, SD. Unfortunately, not all aspects of post-production went so flawlessly.  In our planning we had left ten days for tech problems as this was our first time burning the film to a Blu-ray disc. With three days till show time and still no disc in hand, we became a little frazzled. We owe a special thanks to Lawrence Public Library's subscription to Linda.com and the gracious last minute help we received from Lawrence's own, Through a Glass Productions who ultimately landed us with two brand new Blu-rays!


The day of the premiere was spent with our families and our special guests whom had traveled many miles to join us on this special day. That evening, we arrived at the venue with freshly crafted speeches and commenced pacing up and down backstage. Ten minutes to showtime we received word  the show had sold-out and that there was still a significant line trailing out the door and down the sidewalk! 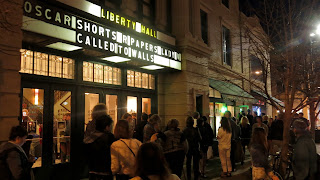 The sold-out show was certainly a surprise to us both! On this unusually warm and calm Saturday evening, more than 500 people had come to see Called to Walls. This was the result of a number of factors including a wealth of community support from friends, local businesses and numerous media outlets. A special thanks to Liberty Hall staff, Free State Brewery, Dave Loewenstein, Julia Cole, Audrey Schmitz, Arlene Goldbard, Dean Edington, Rolf Peterman, Whatever Forever, Decade Coffee Shop, Invisible Public library, No Magic, Jon Niccum, Laura Lorson, Joanna Hlavacek, C.J. Janovy, Megan Lewis, I Heart Local Music and many others! We deeply appreciate your support and enthusiasm for the film!


Now, more than a week later we are still collecting ourselves. It was truly an overwhelming experience to see so many familiar faces from different facets of our lives, gathered together in one place. Thank you to everyone who came out to the screening and for sharing this special night with us.

For those who were unable to make the screening, we are happy to announce that Called to Walls has been selected to be in the KC Film Festival, Middle of the Map Film Festival, and the Sioux Empire Film Festival! Please join us at these upcoming events!

Feel free to “like” the Called to Walls Facebook page, check us out @Calledtowalls on twitter and we will certainly keep you posted as future screening dates emerge.