Chapter 2: Where it All Began: Tonkawa, OK

Throughout the year we have made subsequent travels to past mural sites to gather additional footage and interviews for the film. Not only are we grateful for the opportunity this has lent to see friends, but stepping away from the editing desk is a welcomed relief to the process! 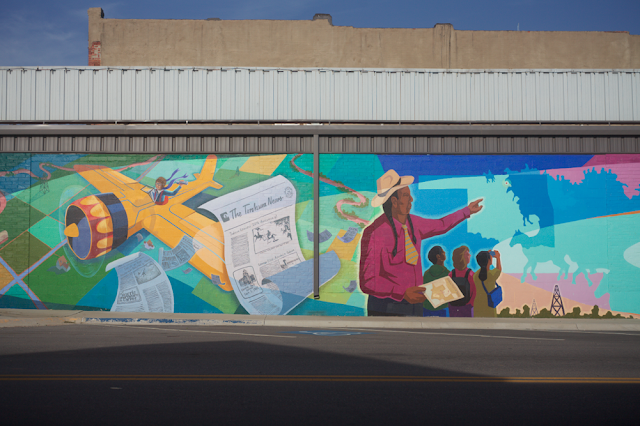 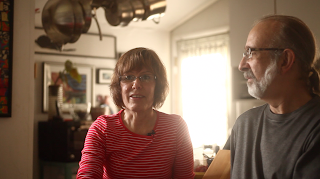 Our first destination to revisit and collect interviews is were the story actually begins, in Tonkawa OK. We were greeted by  Mid America Art Alliance's first project manager, Audrey Schmitz and her partner Ken. We interviewed them and they recapped their experience working on the project. Afterwards they took us to the rooftop of there frame shop downtown and shared this view with us! 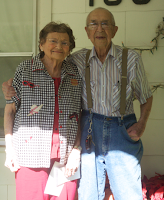 Later on that day we interviewed some town figures that are featured in the mural. Our first stop was at the home of Max Carr. Max is featured in the mural delivering the newspaper to rural homes in an airplane. He recounted what this was like and shared many other wonderful stories that stretched over a span of 80 years. Afterwards we hopped in our car and  traveled east of town to the Tribes community center to interview Tribal President, Don Patterson. Don is the inspiration behind the figure in the mural who is drawing a map on the wall, mentoring and teach a younger generation in the foreground. The imagery in the mural is a reflection on our first meeting with Don and it was an honor to meet with him again. 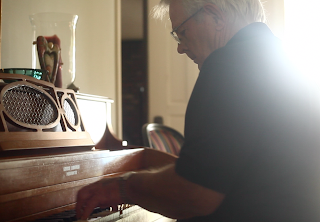 Per request, we were invited to the home of Randy and Melinda. We were delighted to be the audience as Randy played for us an original piano composition that he wrote for his wife Melinda. The song is titled "Melinda the Butterfly" and is a melody that has been woven into the film. We were so excited to hear this song and are grateful to Randy for allowing us to incorporate it into the film. 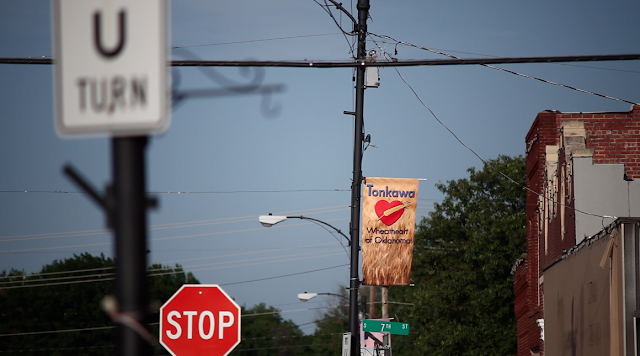 It was a great trip visiting friends and witnessing the many new additions to this charming Oklahoma community. We especially enjoyed it's new banners that proudly adorn the downtown, designed by Tonkawa's own, Ken Crowder......... and now, back to the drawing board (editing table)!

A Year in Review: Chapter 1


Hello dear friends. In the next few months we will be working diligently towards the completion of our first featured length documentary film Called to Walls.  In the mean time, while we are toiling away at the editing bay,  we would like to share with you a small treat: Our year in review...

Actually this begins at the end of 2012, in  Arkadelphia Arkansas. Arkadelphia (for all skeptics, this is a real town name) was the final project site documented for our film and the fourth of six completed in the Mid-America Mural Project. Arkadelphia is both the ending locale of our documentary efforts in 2012 and the beginning of our final push in 2014! lets begin in 2012 shall we..

In the fall of 2012, the film team uprooted once again from Lawrence, KS for a scenic journey headed south via the vast and winding roads of the Ozark and Magazine mountains. Arriving in Arkadelphia we discovered the familiar faces of Dave Loewenstein, mural assistant Ashley Laird and newbie mural apprentice Jordan Karpe.  As we expected, the mural crew was already well underway  researching the local history and collecting stories on the fourth site of The Mid-America Mural Project.

The town of Arkadelphia is nestled within a great architecture of breathtaking rivers, secluded historical bluffs, languid mountain roads and mysterious valley ponds. From the epic coniferous trees standing tall in the forest to the massive piles of downed logs stacked high and wide, we were constantly reminded of the logging industry's powerful presence in this part of the country. Each day, like clockwork, massive trucks wind there way down through the mountains transporting this precious resource of timber en-route to the nearby Georgia Pacific paper mill. 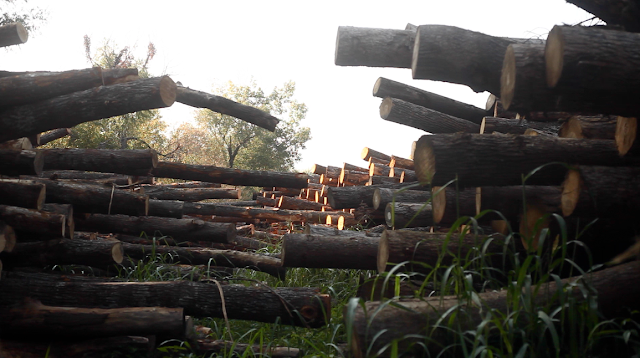 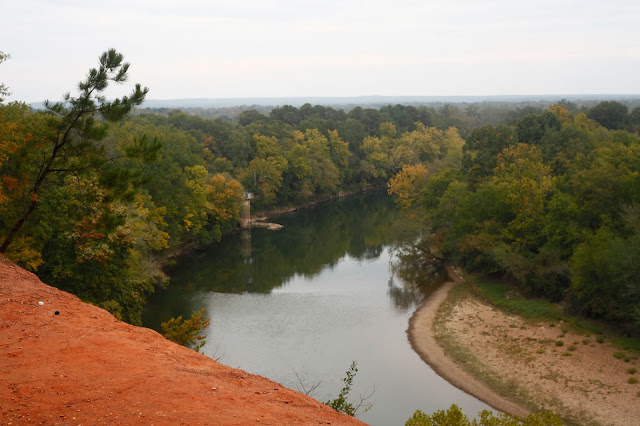 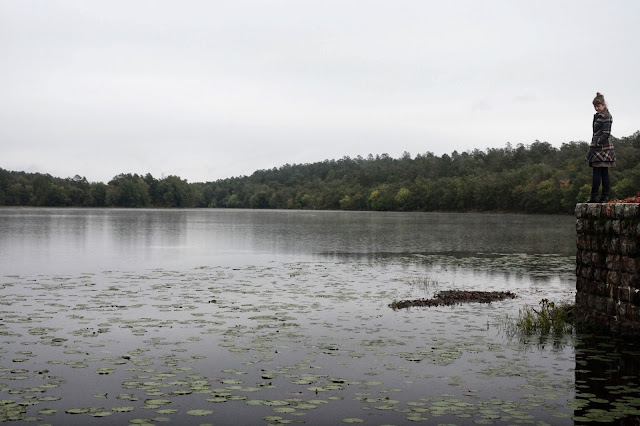 Towards the end of each day,  just as in this photo, the mural wall would catch the evening light in all of its glory. Here we are looking into the window of the Beehive Thrift Store. Reflected in the window is the Honeycomb restaurant, a wonderful eatery and home to the west-facing mural.   Both the Honeycomb restaurant and Beehive thrift are owned and operated by an amazing organization known as Group Living Inc. Group Living's mission, as explained to us by it's director Jane Lucas is: "To help every person we serve to meet the highest level of independence possible."  Group living is a remarkable organization that provides assistants to adults with developmental disabilities. It has been a great honor getting to know this organization, it's clients, employees and patrons. 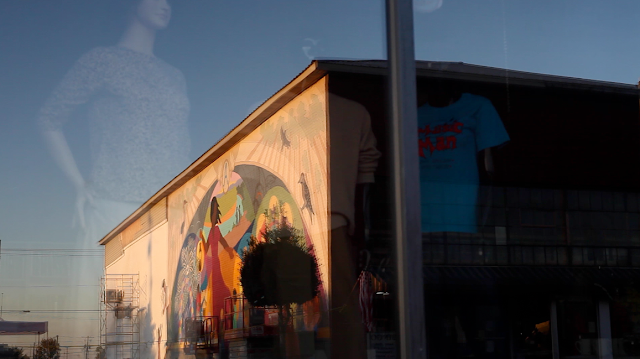 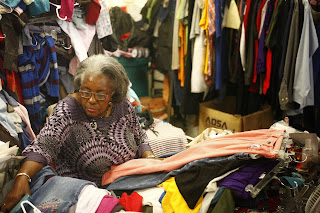 Working behind the scenes at the Beehive we found Ms. Corine. It is here at this desk that she sorts through the piles of donated items and assigns them a price before they are neatly organized on hanging racks. After getting to know Ms. Corine, we came to find out that she also leads group singing at Group Living Inc.  Corine invited us to attend one of these sing-alongs and we eagerly accepted. The atmosphere of joy and collaboration was overwhelming. It was plain to see on the faces of  those leading the songs and those  participating that this was a vital and joyous part of their weekly activities. The singing was highly anticipated by the residents and thoroughly enjoyed by everyone in attendance. The event on this particular day took place gathered around the piano within the Group Living building. Oftentimes though, the group takes a walk and has an outdoor acapella sing-along by the river trail. 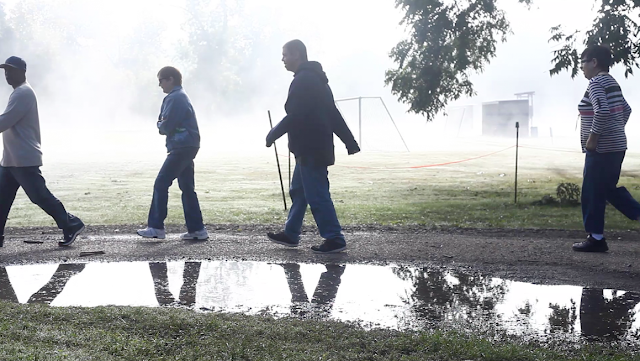 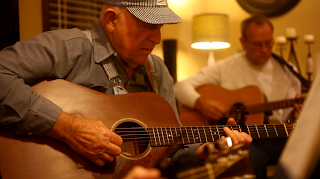 During our time in residence on these projects we always have our ears perked and are on the lookout for local music. Arkadelphia is host to an abundance of talented and generous musicians with fantastic stories. The two bands who played music together at the mural's dedication were the Cedar Creek Band and the Hartley Family Band. The Cedar Creek Band is a eclectic group of grade A storytellers that meet once a week, playing music and sharing dessert and coffee. 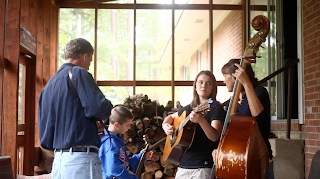 The Hartley's are a tenacious family of homesteaders.They picked up instruments one day and decided to become a lively and captivating family band. Each morning they practice on their porch and we were lucky enough to attend the early morning session pictured here.  http://www.reverbnation.com/hartleyfamily 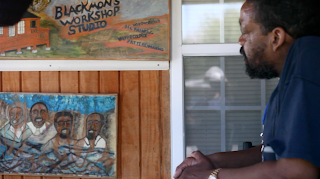 Not only is Arkadelphia filled with captivating musicians, it is also abundant with inspiring artists.  We had the pleasure of meeting and sharing stories with one such gentleman on numerous occasions. Sammy Blackman was a member of the design time and is featured prominently within the Arkadelphia mural. Sammy generously shared recountings of his many challenges growing up with polio as a child and attending school during segregation. Sammy's artwork is among the finest in Arkadelphia, (we can say this, we have MFA's) and we particularly enjoyed his rendition of Mount Rushmore. In Sam's version  the presidents have been replaced by those of Black civil rights leaders. Through the many conversations we had with Sammy, we learned a great deal about Arkadelphia and about the nuts and bolts of our shared history. 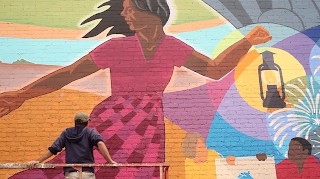 In this image you get a real sense of scale, these are seriously large murals! Pictured here, Dave stares up at what he refers to on his blog site as, "a dynamic allegorical figure, with a dress embellished with keys to unlock ones potential and dreams. She symbolizes the many past and present mentors and teachers who have helped guide Arkadelphia’s young people."

This figure, although allegorical, does have roots in Arkadelphia. In the mural, the main figure's dress is being hemmed by a seamstress. That seamstress was inspired by Arkadelphia native Martha Dixon. As a symbolic mentor the largest central figure extends her hand as an invitation and gestures toward Arkadelphia’s Promise, which is illuminated under the lantern carried by the large allegorical figure. 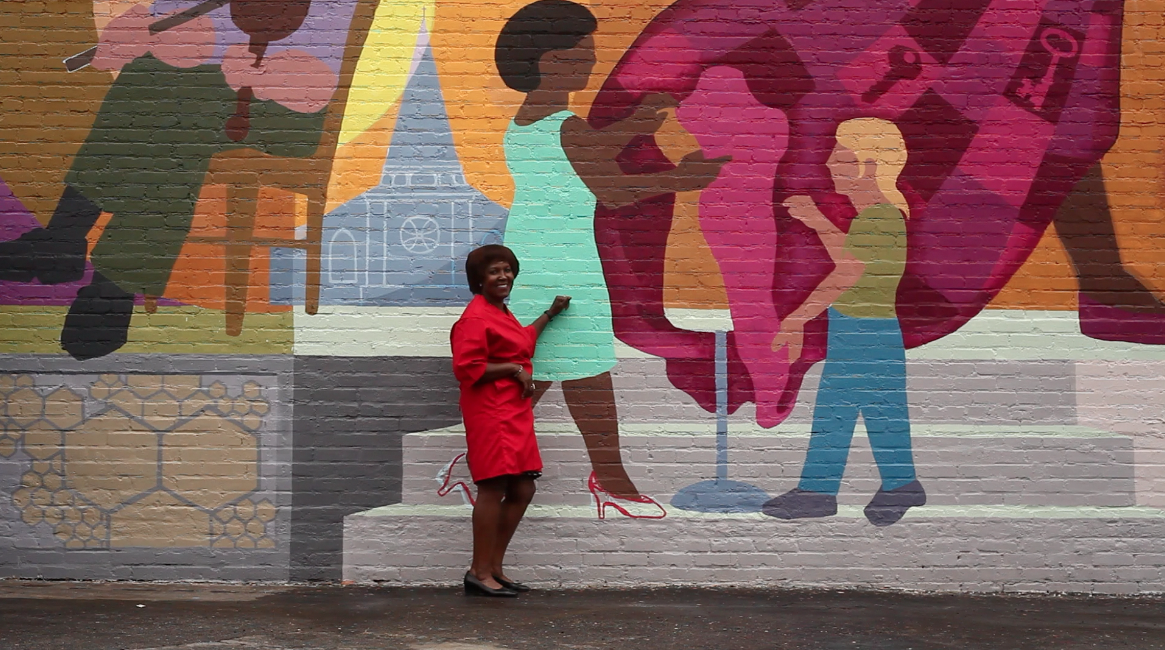 "From what I have seen, the Mural Project has already bridged connections between many project participants. Acting as a civic forum, these projects promote engaged and revealing conversations about the history, present time, and future of these towns and the people that inhabit them. My role while in residence is to document the community process led by Artist Dave Loewenstein and to seek out community members whose stories might help piece together the always complicated and dynamic puzzle of the host community.  In Arkadelphia I found those stories in project participants, in the friendly workers at Beehive thrift store, in community leaders and in the local president of the NAACP just to name a few. " - Nicholas Ward


After filming in Arkadelphia, we returned to our home/studio in Lawrence, Ks where we spent the greater portion of 2013 taking turns at this state of the art,  high-tech editing bay...... the day-to-day scene looks something like this. 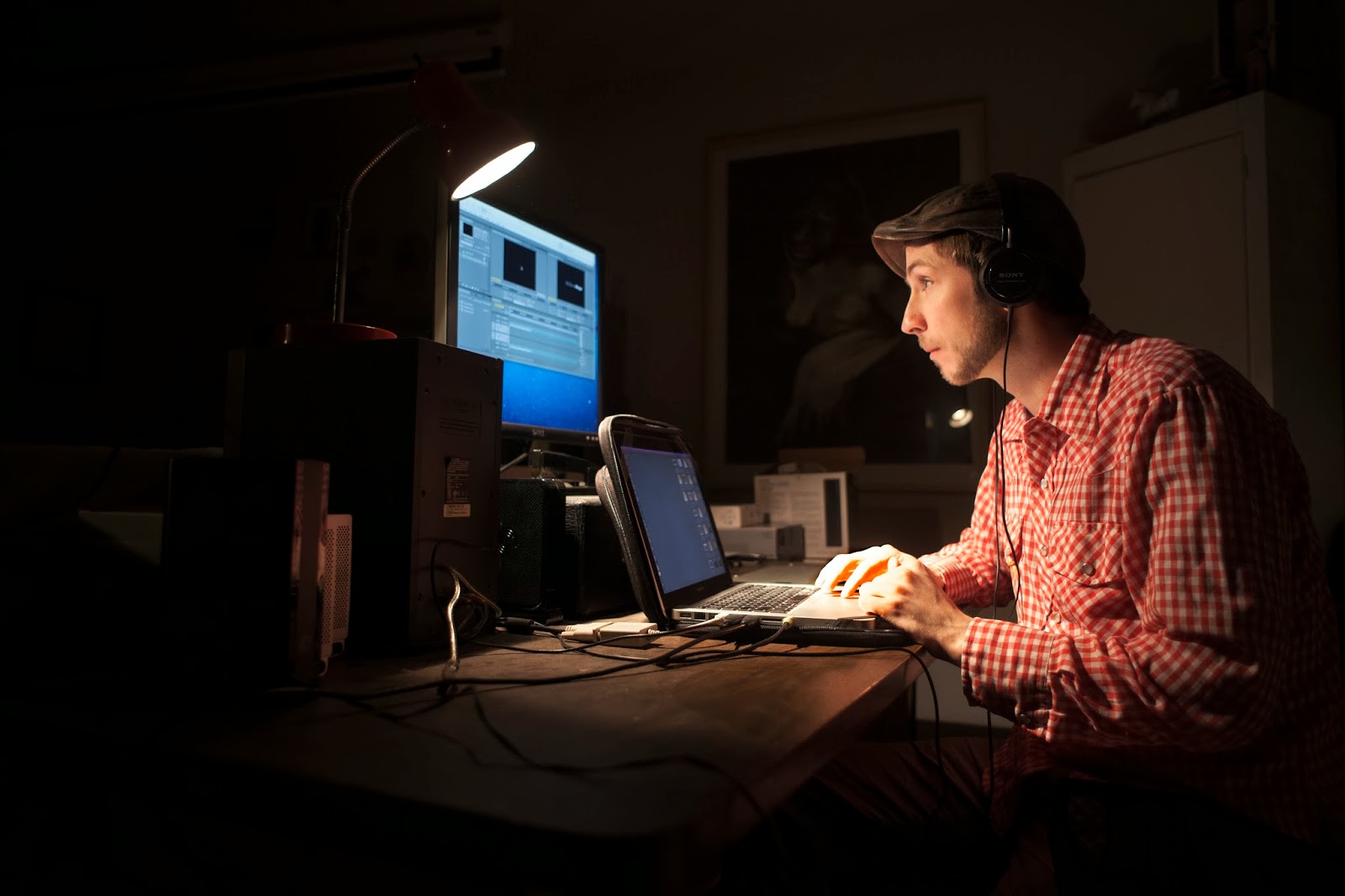 Stay tuned for chapter two of the Called to Walls year in review!
Posted by tortuga at 9:06 AM No comments: